Fenris Games has been developing some really nice products for all the style of games that you can imagine and for some time now they have been planing some 3d Space corridors for your favourite spaceship crawler game.

I have a soft spot for these style of games so you can imagine how happy I was when they released the first pictures of what they have been doing.

Knowing Fenris games legendary talent to cast resin in a quality level that you would be amazed, these are indeed some cool tiles that I need for both my 28mm and 15mm!
But that's not all this is just the beginning since here are some wip shots of the walls they are also doing for these previewed Sulaco tiles.

Drooling material hey? And since I usually don't do reviews of things that I'm not directly involved either as a sculptor or collector I will just say this, I have these tiles with me and I have been working on them because I believe that all spaceships do need Bug things ;) So if you like spaceships and alien things you will probably like what it's been developed for Fenris games.
More information on Fenris Games site here!
Posted by NAVARRO 3 comments:

Huge amounts of time was spent sculpting these bases for the Corpses Fields Base sets, soon to be released by Secret Weapon Miniatures. I hope they are useful for your bigger models or who knows a starting point for a nice diorama.
BIG OVAL

These take the title as the most complex, time consuming and greenstuff intensive bases I ever sculpted to this day.
Posted by NAVARRO 6 comments:

I would like to introduce one new 15mm project that I have just started a few days ago and also take this opportunity to welcome a new company to the industry.
Loud Ninja Games blog can be found at:
http://loudninjagames.blogspot.com/
and from what you can see so far its preparing some really nice creatures for the 15mm fans.
One of those creatures is the Space raptors
THE CHUHUAC 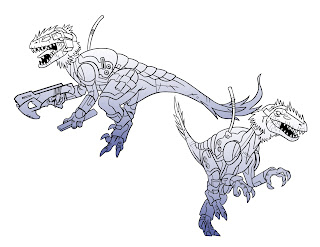 How cool are those hey? Well it gets even better since I was invited to sculpt these little raptors... so that's my next 15mm commission, man I'm I lucky!
Although I still have some catching up to do on other projects. So lots of new projects and also some old ones are really keeping my sculpting tools busy. Cool!
Posted by NAVARRO 4 comments:

One of my passions regarding my sculpting is that drawing is a big part of the creative process and many times I drift away doodling some monsters and strange creatures and imaging them on the sculpting bench and eventually on a table as part of one of my tabletop adventures. FUN! I love sketching things.

As such I open a new category of posts on this blog called MINI CONCEPTS.
Here I will post my drawings and concepts and all kinds of random ideas that sometimes I capture on a paper...


Here is the first creature to enter this train wreck, I decided to name it XANTOLA and it was born by accident when brainstorming about space monsters with a friend.

I could try and write a nice background for it but its really not my thing and from what all of you have seen on this blog I suck with words.
Will this one be sculpted? I really have no idea because I'm kind of impulsive regarding these things, if one weekend I'm in a mood for XANTOLAS I will sculpt some for sure and in 15mm.
Posted by NAVARRO 7 comments:

Just a small update with some groovy pictures with all the Harook teams I sculpted to this date.

I just love to see all the minis displayed in one picture and I think its one of those things all wargamers do enjoy to look at, big squads, armies etc.
So far 17 Harooks are finished and surely some more Harook things will be sculpted soon for all the 15mm Scifi fans.
Posted by NAVARRO 1 comment:

Here are my latest sculpts for the Harook, I really love the concept that Mad Robot miniatures created for these.

Seven miniatures including one little drone.
The SAW team

The Sniper team with a Targeting drone

I hope you 15mm fans liked this because for me it was a blast to sculpt these little Harooks. Can't wait to paint some for my collection!
Posted by NAVARRO 6 comments: 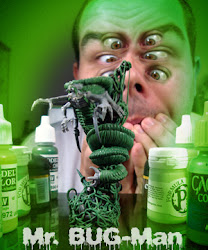